We would like to introduce you to our this years participants! We are looking forward to a great and colorful week of competition at Dom im Berg. 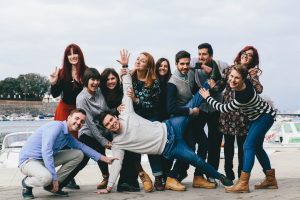 Did you ever spend your holidays in Zadar? A.K.A. CrescendoIf not, our Croatian guests are definitely going to tempt you to do so: the eleven members of A.K.A. Crescendo are total pros when it comes to praise their home town to musical skies. This is audible in their original music videos where they present group made arrangements in the picturesque setting of beautiful Croatian landscapes. However, apart from the Croatian national anthem and their phenomenal cover of Tomislav Ivčić‘s „Kalelarga“ (Zadar‘s main road) they also interpreted internationally appreciated classics and hits like „Stand by me“ (Ben E. King) or „Hello“ (Adele). It was in 2013, ten years after the University of Zadar‘s foundation, that the (for now) one and only Croatian collegiate a cappella group was born as a junction of the two – back then still rival – ensembles on campus. 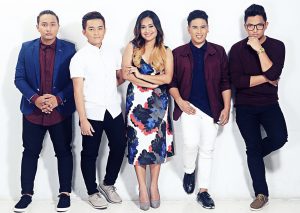 This year, it‘s clearly Michelle, Almond, Joshua, Ronnel and Ricky who took on the longest path to join our competition, enchanting us with Ronnel‘s arrangements of Filipino and international pop hits. Although they are our youngest participants (beside „Quintessence“), each of them already followed a considerable musical career which makes itself heard! In the current constellation, everything started with the Tagalog traditional nursery rhyme „Ang Tatlong Bibe“. The group‘s interpretation of this song – talking about three little ducklings – was the starting point for numerous successes which have been rewarded with the first place at „AKA A Cappella“ 2016, the „Asia-Pacific A Cappella Championship League“. 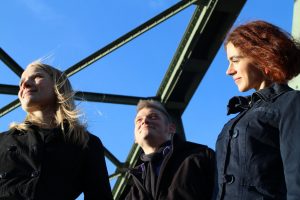 „ADD ONE – 100% voice * 100% ourselves * 100% groovy * 100% loveable“ – that‘s what can be curiously read on their homepage. For the second time already the trio is enriching our event with spheric, souly and funky jazz and pop sounds, most often spiced up ADDing that live improvised certain something. Conductor Matthias, widely travelled Imke and Julia, who is well versed in both choreography and theatre, feel not only connected through their completed studies in jazz singing. What unites them is the stirring atmosphere they create performing together, texting and grooving in their passionate, critical and powerful-voiced way. Most justifiably, they have been awarded gold for the best vocal group and silver for the best funk&soul song at „Deutscher Rock- und Pop-Preis“ 2012. 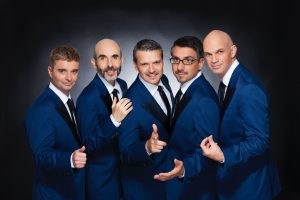 Also for the second time on board: Alti&Bassi from Milano. Full nine years have passed since these five gentlemen have taken part in Vokal Total, winning a silver diploma in both the categories of jazz and pop. Meanwhile, the 1995 founded quintet has been quite busy producing: two new albums can be enjoyed, with „La nave dei sogni“ (2015) – their latest production – having been rewarded with the American „CARA Award“ for the best jazz album and the best European album. Let‘s join them on their ship of musical dreams! We are excited to discover the harmonious, creative oceans to which Andrea, Paolo, Alberto, Diego and Filippo are gonna sing us this time.

Mix five young guys from Dresden, Esslingen and Berlin, give them a microphone and listen to the fascinating sounds that this is going to be created. Since 2014 these passionate singers are involved in the a cappella scene, every now and then even including their fans in online song-chosing-processes. Two years ago, they won the semi finale of „Jugend kulturell Förderpreis A Cappella“ which gave them the chance to perform at the finals in Hamburg – a big opportunity for the group. The YouTube followers‘ favourite video is the stylish black and white clip of a Pentatonix cover where the quintet gives new voices to Beyoncé. 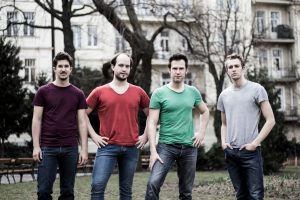 You are carefully studying the band picture, thinking: Don‘t I know one of these guys from somewhere? Then you probably heard Phillip last year with his jazz ensemble „Aspiro“ who won second place plus one Gold Diploma at Vokal Total 2016. Or you know him as keyboarder and conductor of Conchita Wurst‘s band. At any rate, this time you are gonna see him on stage in a brand new line-up. Together with Stefan, Lukas and Matthias, the band‘s goal is to „set a new, striking accent in the existing a cappella pop landscape, with a new sound concept and punchy arrangements“. Intensified through live effects produced by the octavor or the loop machine, we can expect a sound experience of very special kind. 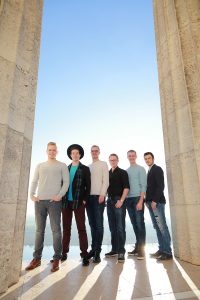 From classical music to pop, from Orlando di Lasso to Eric Clapton and Jason Mraz, from tourism and communications theory to business studies, from 18 to 27 years: „Free Vocals“ combines all of it and it‘s that diversity and their fine artistic sense that defines the six young men. Having completed their musical training at the „Regensburger Domspatzen“ – one of the oldest boys‘ choirs in the world – Stephan and Florian made use of this platform to found „Free Vocals“ in 2015. One by one, they got Felix, Marco, Lorenz and Peter on board with them. Since then, the sextet is setting the mood and bringing acoustic delight to numerous events like weddings, baptisms or business happenings. 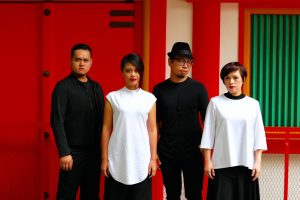 Gili 織樂 – that means „weaving happiness through music“. That the quartet from Taipei (Taiwan‘s capital) is indeed able to do so and was proven at the „Vocal Asia Festival“ 2016. At this event, which connects the long a cappella history of Taitung‘s aboriginal inhabitants with contemporary forms, the four Taiwanese jazz prodigies managed to win gold. That lead them to the „VoiceJam 2017“ which took place in the United States and within the framework of which they shared their experiences in creating contact between jazz and Atayal music, the music of Taiwanese Aboriginies. We are very much looking forward to the far travelled Gili Singers and their musical weaving skills! 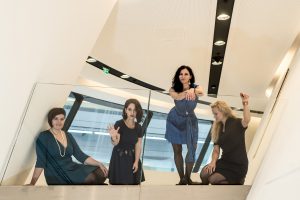 The self-appointed „experimental vocal cords‘ collective“ comprises four very special sound artists with a taste for improvisation: Boglárka, Anna, Susanne and – again – Anna. Exploring new sound, reinterpreting folklore songs aswell as classics and by that „exploring and demystifying the worlds of pure harmony“, they are singing their jazzy heart out. Seeming contradictions are being united and organic soundscapes created, – as soon as the quartet gets started. You can safely put down any conditioned expectations or habits to fully enjoy the sound sceneries‘ dimensions which get each time awaken to surprisingly new life by the ladies‘ challenging vocal acrobatics. 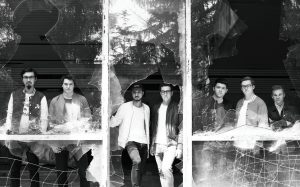 Group member Max compares music with his second great passion: cooking. As for him, both can be defined as a „harmonic interplay of different spices which results in a creative, joint piece of art“. „Piccanto“‘s special ingredients for this piece of art are, beside pop vocals‘ student Max, as follows: trumpet player Josi and Patrick, who both sing in choirs since they are little; disability care worker Elias who won a national beatboxing championship; BOKU (the Viennese University of Natural Resources and Life Sciences) student Berni with his passion for nature conservation; flutist Leo and, last but not least, sports and event management – student Raphi. The latter enrolled the mixed spices from Salzburg for the „Große Chance der Chöre 2015“ (an Austrian talent television show)  which they proudly won. 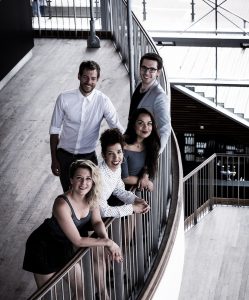 With „The Junction“ a fair bit of things do intersect: modern jazz harmonies with crazy hip hop beats, for example. Or Mediterranean culture and music with influences from Africa and classical tones. All this is due to the lucky coincidence that made Isa, Margriet, Joyce-Lou, Henk and Paul cross their musical paths and led to the jazzy, original quintet‘s creation. Since their nomination for the best jazz arrangement at vokal.total.2013, a lot has happened: after extensive touring in South Korea, Indonesia and China, the ensemble lately celebrated the release of their debut album „Right down the Road“. Proficiat! 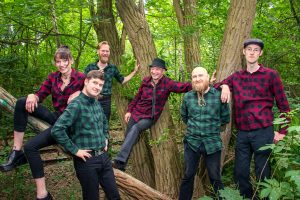 „Knorke“ is a word from Berlin, used to designate something fabulous or great (comparable to the Viennese „leiwand“); and fabulous is the self-appointed singing chapel indeed! The humorous troupe is composed of six „Knorkies“: Malin, who consists to „57,3% of completely freaked out thoughts“; the „tattoed eco-Billy“ Andreas, Till „the Ear“ (not even the tiniest wrong tone is overheard), Barnie the bass, mischievous Alex and minstrel Julian. Influenced by „Knorkator“ and „Muse“, the sextet is making unconventionally crazy a cappella music of finest quality. Their first very own song, „Ohne Kopp“ (Without Head), was finished in 2016, – being sophisticated first-class musical enjoyment. In other words – true to their latest concert‘s motto: „It‘s vocal madness“! 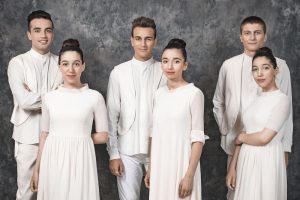 Those six young musicians from the Caucasus seem familiar to you? Maybe you‘ve listened to their rhythmically demanding arrangements two years ago, mouth wide open; – because that‘s when Lasha, Giorgi, Saba, Salome, Elene and Natia were performing at „Voice Mania“ in Vienna and at vokal.total.2013, keeping the audience in awe. The ensemble, which was founded in Tbilisi, Georgia‘s beautiful capital, surprises with a mixture of masterful jazz, Georgian folklore and finely nuanced classical music. All of this despite the fact that the average age of the band members is just 19 years! Lean back and enjoy. 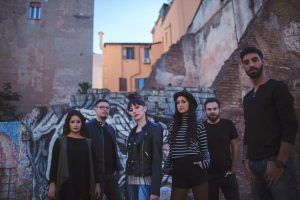 Only last summer did they leave Vokal Total with a silver diploma in their pocket; this year, despite intense work on their first EP of Italian songs („HOME“), they are with us again. Arianna, Veronica, Piera, Tommaso, Simone and Giacomo are gonna re-provide us with their powerful pop hit covers, taking as well care of the Mediterranean flair at „Dom im Berg“. For those of you who know the group‘s elaborated music videos, their intense beats and professional stage show are not going to surprise you. We are looking forward to „Upsweep“ (which is, by the way, an underwater sound of unknown origin, measured in the Pacific) from Rome – una delizia per gli orecchi!