This year is going to be the toughest competition ever! We never had so many award winning high class Beatboxers competing at the same time. You really don’t want to miss out on this. Get your tickets now! 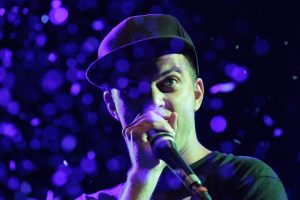 How can one win the Beatbox Shootout?

The applicants need to send us a Wildcard-Video. They have to be posted on our BBS-Facebookpage. This year our Jury had to look at almost 100 videos and pick only 8 Beatboxers that get invited to Graz. These lucky ones get a Euro 100,- to support their traveling costs and  during the competition week we pay for their hotel rooms.

On the night of the competition the contestants will be matched against each other in an ultimate knockout tournament. That means that the loser of each 90 second bracket is immediately eliminated from winning the first prize. Since we are running a Beatbox Shootout only one can be the “survivor”. No worries, we don’t shoot live ammunition and the contestants really treasure the gravestones that we give them. For every round one Beatboxer “survives” each gets Euro 100,- and so the survivor wins a total amount of Euro 1000,- in the battle. But the honor to have won the Beatbox Shootout at vokal.total is worth even more. We have planned many sideevents where our eight contestants can perform and win other prices. Stay tuned to be informed!

Look, Efaybee (FRA) is still smiling after getting a Gravestone!

Who is going to judge?

Famous and widely respected in the beatboxing scene!

The contestants of this years battle!