We love it when Alumni come back to Graz!

Do you remember ONAIR (GER) the 1st Place Ward Swingle Award and Gold Diploma Winners of the Category Pop at vokal.total.2013? Well they have been quite busy in the last couple of years with winning many other competitions and touring the world with their wonderful A Cappella Music!

With their first two shows “Take off!” and “Illuminate” the Berlin based A Cappella Ensemble has sung themselves with breathtaking speed to be one of the top international vocalgroups. They won numerous awards in Europe, Asia and the USA for their intense vocals and perfection, their artsy and strong arrangements as well as for their innovative sound design. 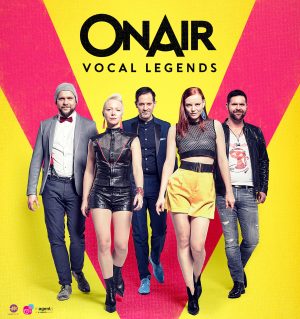 ONAIR sang in their former shows songs of artist like Björk, Sting, Led Zeppelin, Kate Bush, Massive Attack or Rammstein in a spectacular new way, they now decided to expand their repertoire with numerous fabled and brand new songs out of the international and German pop and rock history.  For instance songs of Prince, Depeche Mode, Michael Jackson, Pink Floyd, Lou Reed, Linkin Park, Whitney Houston, Coldplay, Adele and many more. With these they create many inspiring and touching moments.

With “VOCAL LEGENDS” they follow their successful path and build upon their world wide reputation as one of the most exciting and creative vocal pop bands.

Save your ticket now!

Some interesting facts about ONAIR

What others say about ONAIR

„ONAIR defines the future of Pop A Cappella music – the best of Performance Art. They are the perfect combination of voices and personalities. Their instincts seem to be spot on from the team they create to the repertoire in which they invest. I think the universe just beckoned for them to be born. To me, they are the “Cirque De Soleil” of A Cappella Pop music – completely intriguing, and something you never want to end.” -Kim Nazarian (New York Voices)

„ONAIR is a remarkable group of vocalists that can only be described as an ensemble that defines a cappella music in the 21st century. One has to experience their style, blend and showmanship to appreciate what contemporary group singing is all about. ONAIR will transform you from an easy listener to an avid fan of theirmusical excellence.“ -Bob Stoloff (Berklee College of Music)

„It was truly inspiring to meet ONAIR. They have a unique tonal quality and a fantastic sense of rhythm. Eachmember span widely from classic to pop effortlessly. But on top of that they seem to have the essential love and understanding for the music they create. That is the key to music.“
-Anders Edenroth (THE REAL GROUP)