A short story about GrazMuseum 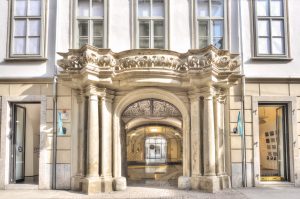 The GrazMuseum is located at Palais Khuenburg in the centre of Graz nearby the Schloßberg and close to our main stage in the Dom im Berg. For us a reason to present a little bit of the stunning and rather unknown history of the building.

The palace was build in 1564. Count Gandolf von Khuenburg, whom the residence is named after, rebuilt and added  the complex in 1690.

Between the years 1863 and 1866 Archduke Charles Ludwig of Austria, the brother of Emperor Franz Joseph, and his wife Maria Annunziata of Naples-Sicily, lived in the Palais. On December 18th 1863 the Crown Prince Franz Ferdinand of Austria-Este, who was assassinated in the attempt of Sarajevo in 1914, the trigger of the First World War, was born in the Palais Kuhenburg.

After several changes of ownership, the house became property of the City of Graz in 1918. It was especially used as an intermediate school for girls, for the city administration during the second world war and afterwards by the British occupiers.

After the house was decaying more and more the demolition was planned to build a parking garage. However, it was generalized in the years 1969 to 1972. After the renovation, GrazMuseum (former Stadtmuseum Graz) moved into this building. 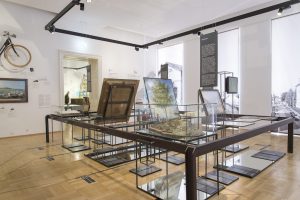 The museum, founded in 1928, was modernized in the 1990s and in 2012. In addition to the permanent exhibition 360 GRAZ, presenting the history of Graz, the 1st floor was reorganized with an open space for the public. This space is used by the museum as an experimental area with exhibitions on current themes of urban life, as well as for the permanent exhibition “Schloßberg Utopias” which can be visited free of charge.
This year the Festival Centre of vokal.total will be located in the foyer of the GrazMuseum during the competition week (July 17th thru 21st). In addition, workshops are held in the lecture hall of the museum.
More information about the exhibition program of the GrazMuseum can be found on their Homepage.