What is there to win!? 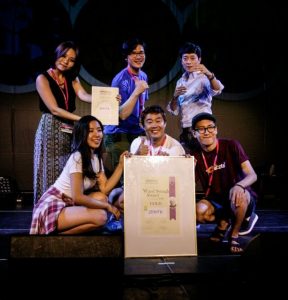 There is a 17 year tradition of vokal.total and therefore we have a lot of groups listed on our Wall of Fame, that became pretty popular in the a cappella scene over the years. Winning a Ward Swingle Award is a big honor and groups all over the world cherish that title. Every first prize Ward Swingle Award comes with Euro 1.500 in cash. There will be additional vokal.total.diplomas given out in gold, silver and bronze. These measure the quality of the performance of an ensemble by the standards of vokal.total.

It is a little different for our beatboxers. First they have to qualify with a wild card video that they send us. Only 8 beatboxers get invited to Graz. We pay for their accommodation during the competition week and they get Euro 100 to support their travel expanses. At the Beatbox Shootout they have to compete in a one-on-one elimination battle. For every round a beatboxer wins, he/she gets more money. Winning the 1st battle additional Euro 200, 2nd battle another Euro 300 and becoming the Beatbox Shootout survivor gets him/her Euro 400 on top. So the winner of the grand finale gets total amount of Euro 1000 in cash.

It is very exciting for our audience to sit in on the different competitions and they also do have a vote. The jury and the audience do not always have the same opinion which leads to thrilling discussions afterwards. Winning an Audience Award means being chosen by 300 to 400 people for being the best act of a category.

Our longterm partner TCMC (Taiwan Choral Music Center) invites the 1st prize winners to Taiwan to compete at their competition in Taipei and/or tour around this lovely island.

Becoming Beatbox Shootout Survivor of 2017 also means getting an invitation to China from China Beatbox Association.

To support newcomers of the scene, a talent trophy will be awarded by magenta – die a cappella agentur. The Awardees get coaching/workshops (worth Euro 500) as well as one guaranteed booking for a performance in Germany.

The Winners of a 1st and 2nd Ward Swingle Award become a wild card for Vocal Champs – Sendenhorst A Cappella Contest in Germany.

The Viennese A Cappella Festival Voicemania invites the winners of the 1st prize to give next fall.